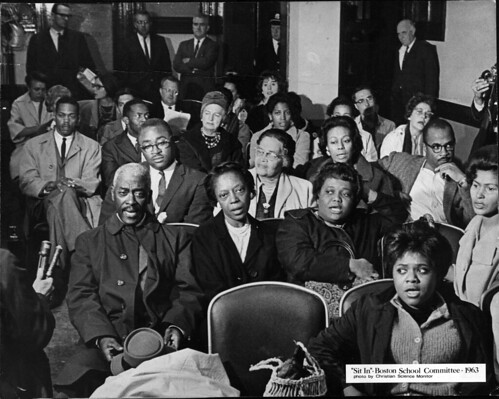 Above: A photograph of parents and community members who attended the Boston School Committee hearing with the NAACP on June 11, 1963. The hearing turned into a sit-in. Source: Northeastern University Archives & Special Collections

Despite the presence of de facto segregation within Boston, the Boston School Committee chose to not address the issue until 1963. In part, this decision resulted from the election process and the voters. The Committee runs citywide, meaning that the Committee relied on the votes of residents whose children did and those whose children did not attend the Boston Public Schools. These include residents whose children were out of school, the elderly, and the parents of students attending the many parochial schools in the city. The City of Boston required these residents to pay taxes allocated to the public schools, so, reasonably, these residents did not want any radical changes or spending increases on the behalf of the public schools. [4]

This letter, distributed by the Boston NAACP, explains the issues around de facto segregation in the schools and why the NAACP is actively involved in putting an end to it.

Aside from this, a more glaring reason could explain the reluctance to address de facto segregation: ignorance from the Committee. The members elected for the term of 1961-1965 included Thomas Eisenstadt, Arthur Gartland, Louise Day Hicks, Joseph Lee, and William O'Connor. 1963, the Committee saw three separate groups address the issue of de facto segregation: Citizens for the Boston Schools, the Congress for Racial Equality (C.O.R.E.), and the National Association for the Advancement of Colored People (NAACP). Citizens for the Boston Schools pointed out that African American students performed lower on standardized tests scores and were receiving fewer dollars per child than white students citywide. C.O.R.E and the Education Committee of the Boston NAACP, led by Ruth Batson, pointed out the low proportion of permanent teachers in the predominantly African Americans schools. [5]

As a result of the complaints, the School Committee elected to hold an open discussion on the topic on June 11, 1963. Representatives from the NAACP laid out fourteen points that the Committee needed to address concerning the Boston Public Schools. Among the points, the NAACP insisted that the the Committee admit the existence of 1) a segragated public school system and 2) discriminatory practices in hiring teachers. The Committee refused to acknowledge de facto segregation and the discrimination in hiring teachers, so a large African American boycott of the Boston Public Schools occurred on June 19, 1963. [6]

Cover of "Because It Is Right-Educationally" the report that put the wheels in motion for the Racial Imbalance Act of 1965. Eventually, the content of this report became the catalyst for federally-mandated integration of BPS nearly a decade later.

Over the next months, the situation worsened between the two groups and they made little progress towards solving the situation. On February 20, 1964, Owen Kiernan, the Commissioner of the State Board of Education, announced the formation of the Advisory Committee on Racial Imbalance and Education, a committee created to study the issue of racial imbalance in Massachusetts, including taking a racial census of the public schools. On June 12, 1964 the committee released a preliminary report stating that:

1. Racial imbalance existed in some schools in Massachusetts

2. Racial imbalance was detrimental to education

3. Racial imbalance occurred naturally, not through the intentional placement of districts. [7]

The final report, “Because it is Right-Educationally,” came out in March 1965. Using the term “racially imbalanced” to mean a school consisting of over 50% non-white students, the report found that a total of fifty-five schools across four cities in Massachusetts were racially imbalanced-- forty-five of which were in Boston. [8]

"Our conclusions are clear. Racial imbalance represents a serious conflict with the American creed of equal opportunity. It is detrimental to sound education in the following ways:

It is imperative that we begin to end this harmful system of separation. The means are at hand. Each day of delay is a day of damage to the children of our Commonwealth."