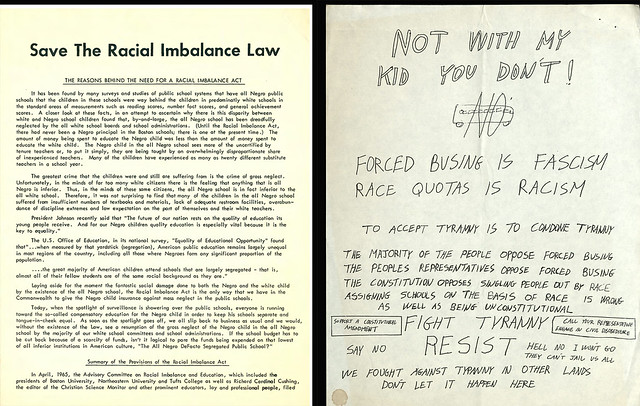 The material from the previous pages help tell an objective story about the origins of forced busing in the Boston Public Schools. The letters below tell that same story, only on a more personal level. For every member of the Boston School Committee or NAACP, there exists countless other residents who live with these decisions concerning racial imbalance on a far more personal scale. People living inside and outside of Massachusetts during this time expressed their diverse views to public officials. Thousands of letters containing strong views and divided opinions poured into city officials. These are the stories of those outside of the realm of public office, those who play no part in creating the circumstances in which they must exist.

Please note that names and addresses have been redacted from this correspondence to protect the privacy of the authors.

The majority of these items are addressed to John F. Collins, the sitting Mayor of the City of Boston from 1960-1968.

1963: This notice informs the African American parents of Boston of the failing negotiations with the Boston School Committee. It asks that, if negotiations continue to fail, that parents do not send their children to school on June 18, 1963.

"WHAT IS A FREEDOM STAY-OUT?: A Freedom Stay-Out is a non-violent way to bring just complaints to the attention of those who can supply relief. Only Junior and Senior High School students who have parental permission will stay out of school. Stay-Out students will participate in an all-day supervised program of Freedom Workshops.”

August 19, 1963: A resident of Wellesley, MA, writes to Mayor John F. Collins asking the Mayor to support upgrading the public schools in Boston neighborhoods that desperately need it. The author is aware that this de facto segregation has led to far inferior schools in predominately African American neighborhoods in the city. Wellesley is an affluent suburban community outside of Boston.

February 26, 1964: A resident of Boston writes to Mayor John F. Collins in support of establishing a committee to investigate the issue of racial imbalance in the Boston Public Schools. This was written before the publication of "Because it is Right-Educationally"

“I deplore the effects upon both white and negro children in the racially imbalanced conditions in the Boston Public Schools…I look to you for some leadership in this matter.”

April 18, 1965: A letter to Mayor John F. Collins from a resident of the Roxbury neighborhood of Boston who believes there are pressing issues in the city other than de facto segregation. The author points out that building new schools will be a waste of millions of dollars.

“A hungry child with no shoes, from a delinquent home, will not succeed in education, no matter how modern, or how beautiful a school is, or where the school is located.”

September 2, 1965: A resident of the Dorchester neighborhood of Boston writes to Mayor John F. Collins asking why the Mayor does not want children in the Dorchester area to attend their neighborhood schools, the Beth El School in particular. The author suggests that the Mayor does not want them to go there in order to gain support from the African American community in the city.

“The only reason you don’t want them to go there is because you are catering to the Negro parents for their votes for United States Senate…I think the white people should have some rights…they should pass a civil rights bill for the white people.”

September 9, 1965: This topic provoked feelings from far beyond the City of Boston. This letter from a resident of Temple, Texas, to Mayor John F. Collins is written by someone who is against the desegregation of Boston public schools. The author does not think that the two races should interact with one another at all. The author begins discussing the impact of having African American children in classrooms with white children. This is a much more radical take on the situation in Boston.

"I heard of the trouble you are having in Boston because of the Negroes trying to place their children in white schools. This is about the worst thing a person could do to a Negro child. He cannot keep up with the white children, and the children of other races, because his I.Q. is lower on average. Therefore, he gets discouraged, and either drops out of school or becomes a disciplinary problem."

1965: This document outlines the Racial Imbalance Act that was passed in 1965 and some of the threats to it. The bill allowed the state Board of Education to take away funding from districts that had schools that were racially imbalanced, as defined by the law. Soon after its passage, many bills were put up for passage that nullified it or took away its power.

“The greatest crime that the children were and are still suffering from is the crime of gross neglect. Unfortunately, in the minds of far too many white citizens…the all Negro school is in fact inferior to the all white school.”

April 12, 1966: A letter to the Boston School Committee from the Greater Boston C.O.R.E. asking the committee to quickly comply with the racial imbalance law, saying that the school committee has not even made a serious attempt to submit a plan in the eight months since the Racial Imbalance Law was passed.

“…after all these eight months you [the Boston School Committee] have not yet submitted an acceptable, even serious, proposal…Boston does not deserve to have this school situation which is a national embarrassment. We demand that you obey the law and the needs of our city and children.”

April 18, 1966: The Headmaster of the Reading Institute of Boston writes to Mayor John F. Collins of his concern and displeasure with the School Committee’s failure to adhere to any of the established laws concerning racial imbalance in the Boston Public Schools. The Headmaster asks when, or if, the city authorities will begin fulfilling their duties and responsibilities.

“The school department’s incompetence, inadequacies, and intolerance constitute a chaotic, tragic misrepresentation of the interests and needs of the City of Boston.”

1967: A notice titled "Save our Schools!" sent to Mayor John F. Collins against the busing of students. The author further believes that the racial imbalance law should be repealed in its entirety because it creates racial strife in the schools and in the community.

“The imbalance law should be repealed in its entirety at once. It is discriminatory-unfair-unjust-unAmerican-not feasible-harmful-it creates racial strife in the schools and in the community.”

← The Racial Imbalance Act of 1965
Strong Reactions and Divided Opinions