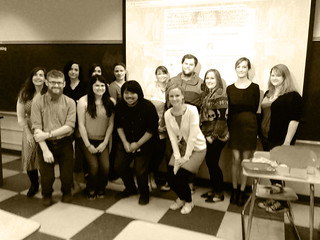 In spring 2015, thirteen intrepid graduate students enrolled in the History course "Transforming Archives in the Digital Age" (taught by Marilyn Morgan). In that experimental course, students explored the history of the desegregation of Boston Public Schools while simultaneoulsy developing technical skills, mastering metadata entry, and learning best practices and approaches to creating digital archives and exhibits. Their careful work established a strong foundation for future development on the topic of segregation in Boston by subsequent classes. Short biographical information about the pioneering students who contributed to this site is below. Visit our course blog for additional biographical information.

Krystle Beaubrun, a graduate student in History, earned a Bachelor of Arts from the University of Massachusetts Boston in 2012. Fascinated by untold narratives from the Reconstruction era, her Master’s thesis “Reactions to Reconstruction in Unexpected Places: Voices from the Forgotten Territory of New Mexico,” explores unheard voices  and neglected narratives.

Corinne Bermon a graduate student in American Studies, earned a bachelor's degree in American Studies from University of Massachusetts Boston in 2009.  Her fascination with Progressive Era women's social activism led to her thesis exploring Rose Standish Nichols' work in Boston and transnationally for the women's peace movement of the early 20th century. Bermon's extensive research led to her being awarded the 2015 American Studies Book Prize.

Katie Burke, a graduate student in Public History, earned Bachelor of Arts degrees in History and studio Art from Earlham College in Indiana (2007). An interest in African and African American History led her to spend a semester in Tanzania and Kenya, and live with local families while she studied. That immersion experience coupled with her work as an Americorp  case manager for homeless youth and a brief stint as a journalism intern in Sri Lanka, prompted her to explore a graduate degree in public history. She hopes to incorporate the unique individual voices and perspectives she encountered in Africa and Sri Lanka into the traditional historical narrative from which they are often underrepresented.

Paul Fuller, a graduate student in Public History, earned a Bachelor of Arts degree in History from Western Connecticut State University. A native New Englander, Paul specializes in urban histories of American cities in the twentieth century and is interested in making history more accessible and relatable to people in their local communities.

Kristin Harris, a graduate student in American Studies, earned a Bachelor of Arts degree in  American Studies from Pennsylvania State University-Abington. Kristin parlayed a lifelong fascination with the paranormal into a legitimate cultural study. Her thesis explores how the television show Ghost Adventures gives voice to Americans living in post-industrial towns and how the paranormal is used to cope with its past and present effects on declining towns.

Claudia Heske earned her doctorate degree in English Literature from the University of Pittsburgh in 2012 while working full time as a program manager of a research training program in the biomedical sciences at UMass Boston. Her own research focuses on late nineteenth and early twentieth century media, especially around issues of representation of the First World War. She plans to receive her Certificate in Archives from UMass Boston by 2016 and further pursue historical research and entrance into the archival field.

Moriah Illsley, a graduate student in Public History, earned a Bachelor of Arts in History from the University of Massachusetts, Lowell in 2014. Moriah recently became interested, in part due to this class, in 20th Century history after spending much of her academic career studying the 18th and 19th Century. Moriah currently works at Lowell National Historical Park and hopes to have a career in the National Park Service.

Laura Kintz, a graduate student in Archives, earned a Bachelor of Science degree in American History from Suffolk University in 2006. She spent several years working at Suffolk's John Joseph Moakley Archive and Institute before a brief foray into the health care field. She returned to her history roots while working as an editorial assistant in the history group of a college textbook publisher, then in 2014 decided that she really wanted to focus more on making history interesting and accessible to the general public. She enrolled at UMass Boston in the fall of that year and has enjoyed working with other like-minded students as she develops her archival skills.

Rebecca Lewis began her graduate career as an English major, but, after earning her MA in English, quickly turned to nineteenth-century American cultural studies and earned an MA in the American Studies program at UMass, focusing on labor and gender in colonial and revolutionary-era New England.  Her work on women tavernkeepers led to a deeper appreciation of subjects who are often omitted from our understanding of American history.  She is now enrolled in the Archives' Certification program at UMass Boston, and looks forward to helping others find primary source materials, so that they may use them in creative ways.

Jacob Lusk, a graduate student in American Studies, earned a Bachelor of Arts in Anthropology at the University of North Carolina at Chapel Hill in 2012. Jacob's interests include twentieth century cultural and social history, film, public history, and ethnic studies. His master’s thesis examined the ways in which African American history has been presented in the tour guide training program of Charleston, South Carolina.

Vini Maranan, a graduate student in History, earned a Bachelor of Arts in Government and Politics from the University of Maryland. Vini specializes in 20th century American history. He will be working his Master's thesis on the U.S.' role during Philippine Presisdent Ferdinand Marcos' implementation of martial law.

Caitlin Pinkham, a graduate student in History, earned a Bachelor of Arts in History at the University of Massachusetts Lowell as a Commonwealth Honors History Scholar in 2013. Her thesis "Seeking Security and Hope in Mill City" focused on how the Great Depression impacted Lowell, Massachusetts. In the summer of 2014, Caitlin interned at Prince William Forest Park in Triangle, Virginia fostering a new interest in the Civilian Conservation Corps. Her Master's thesis will focus on the African American experience in the Civilian Conservation Corps in Massachusetts.

Lauren Prescott, a graduate student in Public History, earned a Bachelor of Arts in History at the University of Massachusetts Amherst in 2012. Interested in local history, Lauren is currently working with the Arlington Historical Society to create a web exhibit that explores the history of Arlington through the lives of one family.