Implementation for Phase I 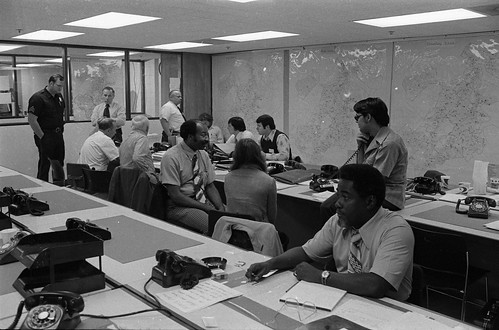 “The School Committee is totally preoccupied with fighting the law and is doing nothing to implement the plan.”

Dentler voiced the elephant in the room when he wrote, “often the same board members and their staff who willfully created a segregated system are assigned the task of implementing a desegregation plan.”[11] As an effect to this, the first few years as Dentler puts it are “balky, bumbling, and diversionary” but he notes that with a good long-term plan the long-term benefits are likewise good. It is not surprising that along with the violence of the first year came confusion for Boston.

Volunteers at the Communication Center. Photo courtsey of the Boston City Archives.

Students in class. Photo courtsey of the Boston City Archives.

Teacher reading to her students. Photo courtsey of the Boston City Archives.

Many within the community had surrendered to desegregation, and likewise urged others to move past their dislike for it and look towards a smooth transition. Mayor Kevin H. White even resigned himself to busing, “It is time for us to live up to and face the reality that the only issue now is the safety and wellbeing of our children.”[12] Smooth transition was not on everyone’s mind. R.O.A.R, Louise Day Hick’s pet organization was planning for stay out of school days, protests, and marches to assert their unhappiness with school integration and forced busing. However unhappy the school committee may have been they began the work of implementing the plan as they were legally bound to.

Before the school year ended in 1974 and Garrity’s decision became public the School Department’s Educational Planning Center had already began work on implementing the State Plan as it stood. By April 15, the center had finished student assignments for the fall and had mailed them to parents. This was a major step in the right direction for Boston public schools. With Garrity’s decision, however changes came to the plan over the summer and these things shuffled, bringing with it an “office of implementation”

Reverend Weeks, leader of a coalition organization, said, “The failure of the Boston School Committee to respond adequately to the state’s plan means that neither students, parents, teachers, nor other school staff know how the partial balancing will affect them this fall.”

During the first year of desegregation, the “office of implementation” consisted of staff borrowed from other permanent departments within the Boston school system, as well as teachers and parents.  As can be seen in the “Status Report Office of Implementation” they were understaffed and without adequate funds to do the work necessary.  A real Implementation Office and department were not set up until 1977; smaller departments and even the mayor of Boston were involved in the first year of busing. The city worked together in their implementation efforts. According to a Boston Globe article Mayor Kevin H. White and his office took over the safety aspects of Phase I and took calls from parents.[13] In the chronology prepared by the Massachusetts Research Center Reverend Weeks, leader of a coalition organization of leaders and parents expressed a haphazard feeling of Phase I.

Status Report Office of Implementation, pgae 1, outlining the concerns and workload for the office.

Status Report Office of Implementation, page 2. The court was attempting to take the power over this office away from the School Committee and create a department under the supervision of the Superintendent.

Status Report Office of Implementation, page 3. Lists staff for the office and their activities.

Status Report Office of Implementation, page 9. These are the pending list of things that the office is working to finish.

Information about the Establishment of the Department of Implementation which did not come into effect until 1977.

Informataion about the history of the Office of Implementation.

"In order to assist the defendants in carrying out their obligations, the court will outline several remedial principles..."

Garrity was a large part of the implementation throughout the eleven years in which he had the reins of desegregation. As evidenced by decades of feet dragging the school committee was not entrusted with making this plan a reality and therefore Judge Garrity kept a watchful eye. He issued orders on the start date for school, student and teacher assignments, hiring of staff, some even went as far as to say that he had his hands in the order of supplies. Garrity delivered a speech on his involvement and the level, which with he really was involved.  Formisano commented that Judge Garrity “became more involved in the everyday school operations than any other judge in the history of desegregation.”[14] According to the records, Garrity issued 415 orders.

Within the orders issued by Garrity he dealt not only with the practical logistics of implementation, but also with the safety precautions involved. In one such order “crowds would be permitted to stand no nearer than 100 yards.” The report by the Commission of the Civil Rights . Police presence was set for the first few weeks and as violence continued so too did their presence. Frum recounted that “In the first twenty-six days of school in 1974, there were dozens of injuries, hundreds of arrests, and countless incidents of racial harassment.”[15] Monitors were on buses, and in bathrooms and hallways in schools to keep children safe.

The Civil Rights Commission report also explains the various parent and leadership groups established on orders by Garrity to create parent involvement. Garrity set up within implementation the racial-ethnic parents councils and the citywide parent’s advisory council. The idea was the more parents invested in this plan the smoother the transition could be. Dentler identified that without a good plan and good planners with community backing the implementation plan could only fail.

Phase I produced a rocky start for desegregation and “Boston’s story was the worst in the nation.”[16] Violence and racially charged harassment became front-page news daily and pulled apart neighborhoods. It pitted neighbors and friends against each other. Students incensed by their parents would harass children while at school. Police officers were attacked and harassed attempting to do their jobs. This photograph is the perfect example of the reputation that stained Boston from this whole experience. It left scars on all those involved both physical, in the case of attorney Theodore Landsmark, and emotional. The violence began to drift away when R.O.A.R and other anti-busing members began to realize that no amount of marching and protesting would stop desegregation.

← Phase I and The State Plan
Implementation for Phase I