Kevin White grew up in Boston, the son of a politician he served the city as mayor from 1968 to 1984. White has been described as a political hybrid, “He enjoys and takes great pride in being able to talk easily with many groups of Boston’s diverse population.”[1] He faced uphill challenges in the city as Judge Garrity ordered for the desegregation of Boston’s schools in 1974. Initially White took a stance against busing and the court ordered decision.

Mayor Kevin H. White Steps Up To The Plate 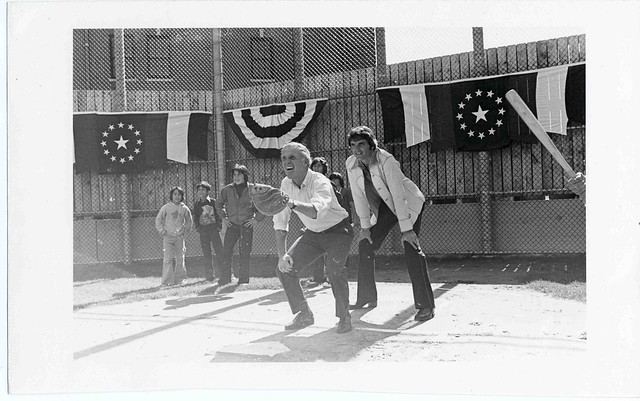 He focused his efforts on maintaining safety and security in the city. As the presence of violence and crisis in the city continued to grow, White placed additional police forces in the Boston. Serving as a Democrat, Mayor White was later described by the New York Times as "a stabilizing presence as he extended protection to the children and opposed order through a heightened police presence."[2] As mayor, White concentrated on the safety of his citizens.

White actively engaged with the public and had the ability to collaborate with diverse audiences. While in office, White employed two African Americans and three Italians.[3] He became the first mayor to diversify his cabinet. White had the ability to solidify relationships across racial and ethnic boundaries. It served as a reflection of the diverse population of Boston at the time.

“Kevin’s idea of a great time is to invite Aga Khan, Johnny Powers, the cardinal and a couple of professors over to the parkman house for dinner, draw them into a discussion, and have the evening end with all of them agreeing that they have a great deal in common.”[4] 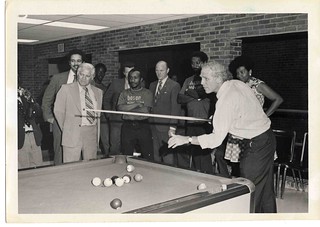 White's four-term tenure as Mayor indicates his widespread popularity. As this image of White (courtesy of the Boston City Archives) playing pool in a neighborhood bar ca.1971-1974 suggests, White actively engaged with the public. Such sporting interactions validate the perception of White as "a politcal hybrid" and "stabilizing presence." Mayor Kevin White had the personality to solidify relationships and bring people together.

As the busing crisis continued to escalate in Boston, and news spread across the country, praise and criticism quickly filled the mayor's office.   Despite the heightened attention, White focused his efforts on maintaining and securing the city. [5]

Look out Mayor! The bleachers are full!

The letters below sent from American citizens outside of Massachusetts and international residents demonstrate the amount of praise and criticism the mayor received. The full collection of letters can be viewed at the Boston City Archives in West Roxbury, Massachusetts. The Domestic Reactions page and the international reactions page organizes the letters by location on a map. A link to these pages can be found in the upper right hand corner.

Feel free to browse the exhibit below that contains both domestic and international letters sent to Mayor Kevin White.